For more information on any release, contact Lindsay Grome, Director of Marketing and Development via email or 513-554-4944.

OneSource Center for Nonprofit Excellence sponsored five regional Toys for Tots distributions in the Greater Cincinnati area throughout July and August. From monster trucks to balls to princesses to ride-on toys, boys and girls from all over the Tri-state area felt a little bit of the holiday feeling in the 90-degree summer heat.

OneSource Center held their toy distribution as part of a Christmas in July event at its headquarters in Queensgate. The event was in conjunction with the opening of their Furniture Bank to the public for the first time in its 36-year-history.

“This is the second year we’ve been able to partner with Good 360 and Toys for Tots on toy distributions around the Greater Cincinnati area,” said Christie Brown OneSource CEO, “This year we invited the public to our headquarters, which was a lot of fun to open our doors to a different audience, and to see the joy on the children’s faces when they found a toy they really wanted!”

Families from surrounding neighborhoods including Westwood, Price Hill, Mt. Auburn, and Avondale, and as far away as Liberty Township and Wilder, KY came to participate.

London Coleman from Westwood brought her 3-year-old son, who picked out his own toys, including a monster truck. “My son always wants toys and I can’t afford them. This is so helpful. It’s perfect timing cause it’s been hard times, and this helps so much,” said Coleman.

Harlie Roberson from East Walnut Hills brought her 7-year-old girl and 5-year-old boy to pick out their own toys. “I get to let them do their own little shopping for the holidays,” said the mother of two. They left with a monkey, fairy, dinosaur dig kit, and a few books.

Mindy Calderon from the Price Hill Neighborhood brought her three daughters who really got into the “Christmas” spirit, donning their Christmas dresses. “It’s so nice to be able to do something for them,” said Calderon. “They each picked out some princesses and loved the donuts! I also found a desk [to buy] for my daughter to use for homeschooling [at the Furniture Bank].”

Four additional Unplug and Play Toys for Tots distributions were also coordinated with BDK and the Reds Community Fund. Thousands of toys and hundreds of people came to the events throughout the Greater Cincinnati area. This is the second year OneSource Center has teamed up with Good360 and Toys for Tots Marines Foundation to give toys to local children. 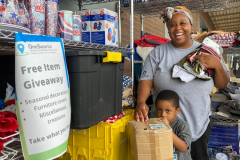 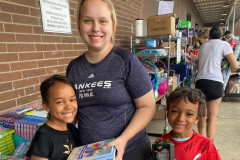 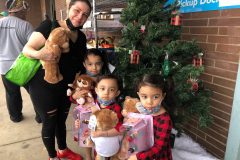 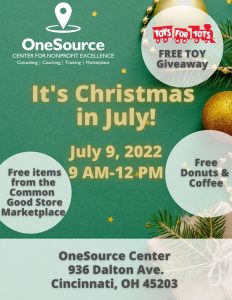 It’s Christmas in July and OneSource Center for Nonprofit Excellence is celebrating by hosting a FREE Toys for Tots distribution AND giving away other items. On Saturday, July 9 from 9 AM-12 PM, OneSource Center will be hosting the Christmas in July event at its headquarters in Queensgate at 936 Dalton Ave. to celebrate opening its doors to the public for the first time in its 36 year history. The event will include a FREE TOY giveaway (Cincinnati and Northern Kentucky) in conjunction with sponsorship from Toys for Tots and Good 360 to help kids “Unplug and Play.”

“This is the second year we’ve had the opportunity to participate as a distributor of Toys for Tots and we couldn’t be more thrilled with the honor,” said Christie Brown, OneSource CEO. “We’re also excited to be able to give away some extra inventory and spread the word that a sale at OneSource Center is truly a sale for the common good, as we invest that money back into professional development and consulting programs for local nonprofits.”

At the July 9 event, OneSource Center will also be giving away select items from their warehouse inventory, including many seasonal items, such as Christmas decorations to help those in need. Light refreshments will also be provided. First-come, first-served. Toys are appropriate for children age 10 and under.

The OneSource Center Common Good Store is now open to the public Tuesdays 4-7 PM and Saturdays 9 AM-12 PM to shop for discounted, gently used office furniture in the Furniture Bank or online, anytime, in the new online catalog.

OneSource Center for Nonprofit Excellence is coordinating a region-wide FREE toy distribution for children during the months of July and August – collaborating with nonprofit sponsors to spread some joy to area youth. The event titled “Unplug and Play” is nationally sponsored by Toys for Tots and Good360.

“The last few years have been especially challenging to children nationwide,” said Christie Brown, OneSource Center CEO. “It is an honor to partner with Toys for Tots, Good360, The BDK Fund, and the Reds Community Fund to get toys into the hands of kids and encourage them to step away from technology this summer and have some good old-fashioned play time with toys.”

OneSource Center for Nonprofit Excellence is a regional redistribution partner for Good360, distributing products and furniture to area nonprofits and those they serve as part of its mission. This is the second year it has coordinated the shipments of thousands of toys to help distribute to area children. Toys are intended for children 10 and under.

Unplug and Play Toy Distributions in July and August:

Stay updated on nonprofit news in the Cincinnati region